"The Brown Bomber," Joe Louis, was born in Lafayette, Alabama on May 13, 1914, and began boxing in the early 1930s. After winning the National AAU Championship in 1934 as a light heavyweight, Joe was on the threshold of one of professional boxing's most illustrious careers.

On July 4, 1934, in his first professional bout, a Chicago main event, Joe totally knocked out Jack Kracken at the end of the first round. Joe would fight and win 11 more bouts over the next five months, 9 by knock-out, and was soon defeating some of the best heavy-weights in the division. 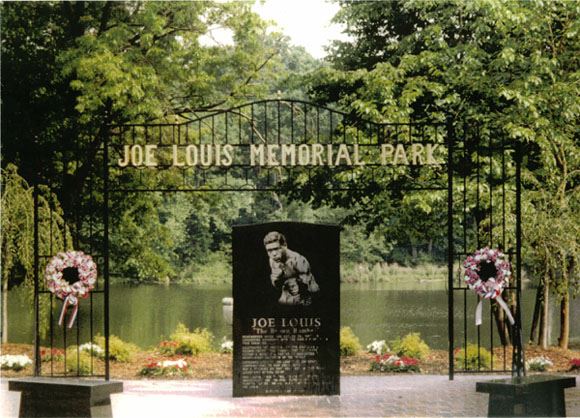 In operation since 1923, Bier's Training Camp had been home to many of the sport's luminaries, including former champions Pancho VIlla, Benny Leonard, Harry Greb, Pete Latzo, Ace Hudkins, Tony Conzoneri, Jimmy McLarnin, Jackie "Kid" Berg, Lou Brouillard, and Primo Carnera. Louis however, would develop a strong bond with the area residents that none of the previous champions ever enjoyed.

While training for the Carnera fight in the spring of 1935, Joe learned that a local pedestrian (Roger Vreeland) was struck by a care and expired while waiting for ambulance service from a neighboring town. A committee of seven began soliciting donations to purchase an ambulance to serve Pompton Lakes and prevent those precious lost minutes from ever costing a life. Miss Elsie Kirkland, the deceased's partner, donated $1,000 but the committee's effort came up short, until Joe Louise offered to fight an exhibition, raised an additional $2,600 and the ambulance was purchased.

Back in the ring, Joe took on a series of former heavyweight champions, knocking out Primo Carnera in the sixth and a few months later, Max Baer in the fourth, but when he faced Max Schmetling, his people had him train in Lakewood, New Jersey, instead of Dr. Bier's, and he was stopped in the 12th round, suffering his first defeat.

Returning to Pompton Lakes, Joe fought former Champion Jack Sharkey, knocking him out in the third round, and setting up a title shot against Champion James J. Braddock. The dismantling of Braddock in eight rounds on June 22, 1937 in Chicago, less than three years since beginning his career, was an amazing achievement, but Joe knew he must revenge his lone loss to Schmetling to be vindicated.

On June 22, 1938, one year after winning the title, he got his chance, and this time training at Doc Bier's, pounded Schmetling into submission, knocking him out at 2:04 of the first round.

Louis continued to train at Doc Bier's camp for most of his career, and retired as the undefeated Heavyweight Champion of the World on March 1, 1949, after defending his title a record 25 times. In the interim, Joe had the opportunity to serve his country as a Sargent in the Army, and fought 96 exhibitions for his fellow soldiers. On the local front, Joe continued to serve his adopted community as well, raising  $2,000 to build a police communications tower in Pompton Lakes.

Joe came out of retirement to fight Ezzard Charles, the reigning champion but lost a 15 round decision. Then on October 26, 1951 in New York he fought his last bout when Rocky Marciano stopped him in eight rounds.

Joe Louis was born, and lived the life of a Champion, both inside and outside the ring until his fierce heart stopped beating on April 12, 1981.

The lasting tribute, this monument erected on land donated by Elks Club 1895, the site of Doc Bier's historic training camp, will serve to immortalize the champion, the patriot, and the friend of our community that was and is Joe Louis.