Emanuel Einstein Memorial Library was designated as a historic site on June 21, 1994. 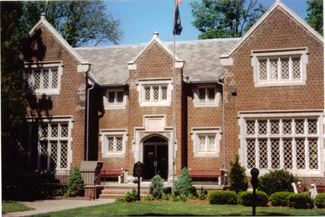 The Library is five bays wide. The end and center bays step forward and are gabled. The grouped, leaded, diamond-paned casement windows have stone surrounds and label molds. The Tudor-arched entrance is preceded by a stone terrace and steps, and features a stone surround with memorial tablet.

The Library is set on a spacious lot with parking at the rear (east). The Library faces west toward Wanaque Avenue.

The Library was named for Emanuel Einstein, President of Raritan Woolen Mills and a New York City resident who summered at Pompton Lakes. The building was a gift to the town from Mrs. Einstein, following Mr. Einstein's death in 1909, and it has been financially supported by Alice VanOrden, Einstein's daughter, for many years.

The first librarian was Thomas Wood. Originally, the Library's second floor provided living space for the librarian and his/her family. It also included a gymnasium and assembly hall, and was intended to function as a social center for the Borough.

A building rehabilitation program was undertaken by the Borough in 1952 under the direction of James J. McGrath, Jr. and Leonard T. Noonan of the Borough Council. A report was produced, and a full-time professional librarian, Mr. John Phillips, was hired.

The Library is an excellent example of the Tudor Revival style as utilized for a civic structure, and its construction parallels the development of Pompton Lakes as a rapidly developing suburb with a need for civic facilities
About Our
Community
News
Flashes
Sign up for
Emergency
Notifications
Flood
Readiness
Chemours/Dupont
Information
[]